The End game: "The burst of the Long-term debt cycle" and what effects it could have on Bitcoin
Market Insights
June 11, 2021

The End game: "The burst of the Long-term debt cycle" and what effects it could have on Bitcoin

Everyone knows that the corona virus pandemic caused a deep economic downturn of uncertain duration in a lot of places. To limit the economic damage caused by the pandemic, central banks all over the world stepped in with a broad array of actions to stimulate the economy. But what are the long-term effects of this so-called stimulus policy on the economy? 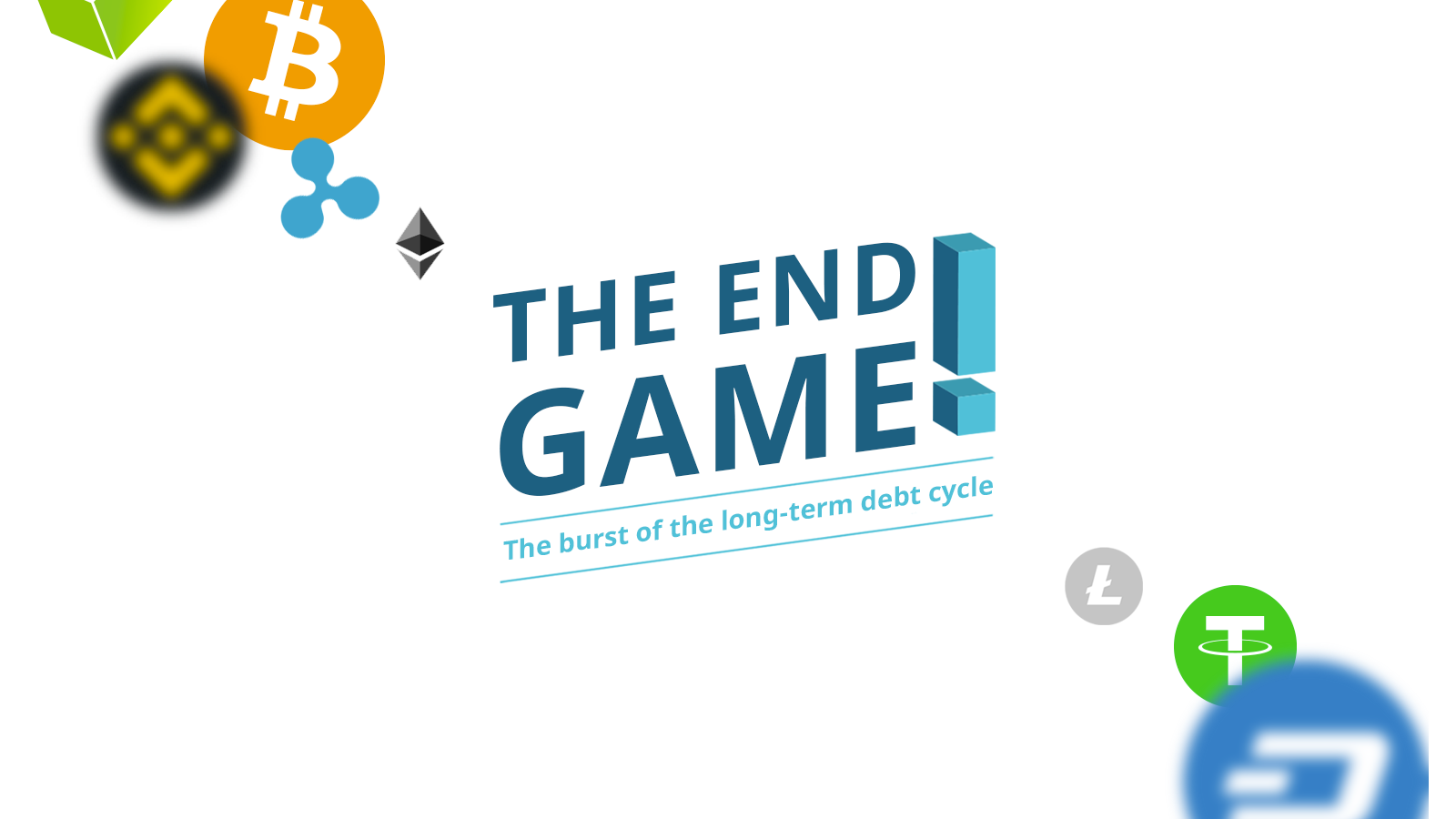 In this article I will use Ray Dalio’s “Principles for Navigating Big Debt Crises” to give my analysis on the global financial system, why I think it’s irreversibly broken, and how it got to where it’s at now. At the end of the article, I will elaborate on how all this could affect Bitcoin.

Before I will discuss dept cycles you should understand what dept is and why it is cyclical in nature.

If you borrow money, you increase your buying power today at the expense of your buying power in the future. This is true on an individual and on a macroeconomic level. Although productivity of an economic system is very important in the long run, forces of debt and credit are the main drivers in volatile economic swings.

These reoccurring economic cycles start with credit contraction, followed by a recession and a recovery which is set into motion with central banks lowering interest rates.

Within every short-term cycle things might look just fine because recovery always happens relatively soon after central banks lower interest rates. The economy makes higher highs and higher lows, and the economy seems to be flourishing. But behind the scenes, central banks are no longer able to raise interest rates as high as prior to the previous recession. This can be seen in the image below.

If interest rates are the central banks’ instrument to cure a recession, but these rates keep trending lower, there will inevitably come a time that they will hit zero. We have already seen interest rates hitting zero ten years ago and we are seeing this again today.

Interest rates hitting zero have characterised the beginning of the end for a currency regime in the past and might predict one in the nearby future, as it shows that debt loads in our economic system have reached unsustainable levels. The logical next step from that point, if we follow policy makers’ incentive structure with a historical perspective, has been and will be to sacrifice the value of the currency. This process is called deleveraging.

Once interest rates can no longer be lowered, things can’t be fixed without deleveraging. Deleveraging is when all of the debt growth in excess of the income growth is removed from the system. Interest-rate reduction is almost always the first response to a debt crisis. This works if there is room to cut the rates further, but if there is no more room to cut interest rates, there are two other monetary policies that could be used to ease the debt burden. As defined by Dalio in Big Debt Crises:

Quantitative Easing (QE)
This is “printing money” to buy debt securities and financial assets. QE puts cash into the hands of investors, who then seek to reinvest it into other financial instruments. Some economists argue that QE isn’t money printing because it involves swapping out a financial asset for an equal amount of money. However, this logic fails because the freshly printed cash money places bids in the credit markets that would not have been there otherwise. QE positively affects investors and asset values, but is doesn’t help those with no assets. This leads to widening the wealth gap. The more QE is used, the less effective it will become. QE is effective in case of a lack of liquidity in financial markets, but once credit markets become sufficiently reinflated, the effects will diminish with each QE.

“Stimulus payments.”
This form of policy puts money directly in the hands of the people. The recent popularization and support for a universal basic income and stimulus checks are examples of this monetary policy. This form of monetary policy can be used as an alternative for the first two forms disproportionately benefitting the investor class. This monetary policy will help the middle and lower classes getting by. Political acceptance of this Monetary policy becomes most prevalent late in a debt cycle, when wealth gaps are great, and masses are looking for possibilities to “get ahead.”

Restructuring debt levels through austerity and debt defaults is extremely painful and will result in deflation. In the past, this may have been a necessary evil and even unavoidable. In the current floating fiat currency system, a deflationary outcome is highly improbable because of the possibility to print unlimited amounts of money, making deflation, unnecessary. Raising taxes and devaluation to restructure debt are much more likely. Devaluation of currency seems to be the only option but is inflationary in nature. The main objective of this option is to print enormous amounts of money in order to proactively devalue the currency, thereby devaluating the outstanding debt. The enormous money injection will devalue the US’s debt burdens and, since the majority of the world’s debt is held in US dollars, the total worldwide debt as well. We can already see this happening; COVID-19 may have been the catalyst for the most recent money printing, but it would have been initiated anyway.

During a period of debt monetization, the rational economic incentive is to protect one’s wealth by looking for assets that cannot be devalued or ‘printed’, like precious metals for instance. Bitcoin is also an asset that cannot be devalued or ‘printed’ because there will only ever be 21,000,000 bitcoins. With Bitcoin, it is possible to store wealth in a self-sovereign way with absolutely zero counterparty or credit risk. Any individual or entity facing unfavourable tax codes can simply protect their wealth behind a wall of encrypted energy, free from the state’s needy hands. With Bitcoin, money is once again a free-market phenomenon, and humanity will flourish as a result.